30 years ago, a few beer loving folk got together and set up a beer festival, hoping they could turn a small profit which they would donate to local charities. Fast-forward to today and what this little gathering has become is a titan of Chester beer festivals, spanning over 3 decades, growing and innovating and leaving others far behind at its wake.

I remember attending my first ever Charity Beer Festival five years ago and can attest that it feels like a million years ago. The festival has grown so much, embraced modern beer styles, other tipples, expanded its selection tenfold and is still striving to surprise me – a jaded ale drinking semi-functioning beer fiend.

But enough of singing their praises – let’s let them do it for themselves! We hunted down Kelvin Lawson, one of the long-serving and long-suffering members of the team who “makes the magic happen” at the festival, and demanded answers to a bunch of questions about the last 30 years.

Take it away, Kelvin.

What was the first Charity Beer Festival you attended?

I’ve been a member of Round Table, the organisation behind the beer festival, for about 10 years and being a member means that you get stuck in when it comes to the beer festival, as it’s a big event and needs a lot of hands on deck. But I got much more heavily involved with the festival planning 6 years ago – and my colleagues would say I haven’t been able to let go ever since!

Well put! As I say, getting involved with the beer festival comes with the territory when you join Round Table. But, as for getting more involved, although it’s hard work and takes a lot of time (you know what it’s like organising events!) there’s a lot to enjoy. There’s beer for a start, as well as the community feel of all the people that come together to support the festival – volunteers, sponsors, local businesses and professionals giving their services for free (the list of people to thank is very long) – also it’s all for charity, so there’s a real sense of why we’re doing it. It’s also a great night out when it all comes together and it’s a good feeling to have been part of making that happen.

It’s a lot bigger and, I think, a lot more inclusive. The beer is still important – and a lot of thought goes into making sure we have a great range and something for everyone – but the festival has grown into a more rounded event with great live music and good food. I really think you could come and have a good time even if (dare I say it) you’re not that into beer. In fact, it’s a really great way for people to dip a toe into the world of beer and find something they do like. Also, we’ve built closer relationships with festival partners over the years, which has helped us to grow and bring new things to the festival like this year’s Barlounge Gin Garden. 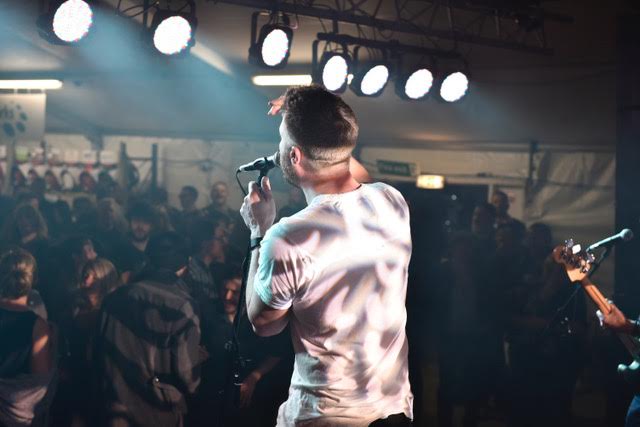 We need to make sure that the festival is current and contemporary whilst also keeping to the core values of the original Round Table vision for the festival of having a few beers, a few laughs, and raising money for charity. The beer scene has changed a lot over recent times and more events are emerging – which is a good thing – but we need to cater to a growing and more discerning audience to keep the event successful.

Generally the crazy happens behind the scenes and before the festival opens with a mad flurry of activity to get everything done. One memory that comes to mind though, is our MC crowdsurfing during the Saturday night finale.

Organising the festival takes a lot of effort from a lot of people working around their day jobs and other commitments, so as we get bigger each year we’re asking a lot of a lot of people. Nowadays we have a core team of volunteers led by Chris Hughes, so we get to spread the planning activities around a few of us. One of the biggest challenges is working to deadlines to get all the elements of the festival to come together on time when everyone is doing this for free and for the love of it – but we do always pull it off!

Well, I can’t claim to have been around for the early days but we do stand on the shoulders of the original organisers and all the hard work they put in to build up the foundations of the festival. Perhaps, if we’d anticipated how big the festival was going to get, we could have thought ahead about to how to grow it – but it’s been a more organic thing over time.

In a nutshell, it’s a great night out. Drink beer (or the tipple of your choice) whilst doing your bit for charity – you can’t go wrong. And if you’re still not convinced, there’s even a free bus. You can’t say fairer than that!

No, you darn well can’t. Agreed!

So, what are you waiting for, beer lovers? Give the Charity Beer Festival some online love, and get your tickets post haste!