Well, who’da thunk it. A bunch of real ale veterans and hard core beer boffins finding themselves in a newly refurbished bar, on the rows of Chester, on a Tuesday night, with cocktails in their hand.

Last night Chester Beer Appreciation Society (CBAS) went off the beaten track and found themselves in Liquor & Co, the newest addition to Chester’s bar scene. It wasn’t the usual “three pints and a little something to eat” kind of night, no Sir! It was the first ever beer cocktail night CBAS has ever organised.

If you’re not familiar with Liquor & Co, and no-one is blaming you if you’re not as they’ve only recently opened their doors to thirsty customers, it’s on the Watergate Rows, where Phoenix used to be. If you ever had the displeasure of visiting Phoenix, you will be pleased to know the boys (and girls) of Liquor & Co have done their utmost to oust any trace of the dive the bar used to be. Gone are the tacky painted walls, dirty floors and grimy “dance floor” upstairs. And hello to a shiny, almost gothic like ceiling, comfortable booths, matching decor and deep, dark colours of brown and green. In short, what used to be a dim little nook in the beautiful Roman city is now a classy force to be reckoned with. 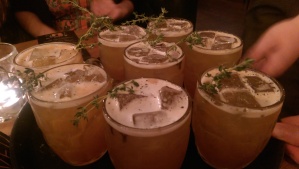 I can probably say, hand on my heart, that most of the CBAS crowd had their suspicions about beer cocktails. After all, they’re used to pints and bottles of crafty ales. But good on them for bravely going where I suspect none of them have gone before. And good on Liquor & Co for throwing the beer geeks out of their comfort zone and right into the unknown.

CBAS were presented with their very own booth, with their very own cocktail menu. From five choices especially designed for the night, they could choose four. Perusing the menu showed what craftsmanship had gone into the design of these cocktails. From a campari and IPA spritzer to sour cherry shandy, the cocktails were complex and well thought out. The most complex of them all was a drink with rum, honey, chamomile tea, angostura bitters and IPA, with thyme sprigs. Sound a bit much? It wasn’t. It was delicious!

The guys at Liquor & Co have done a great job turning an old, tired dive into a shiny new venue. And, it’s not just beer cocktails they do. We spied with our little eye Beavertown beers (Neck Oil, Gamma Ray, Smog Rocket) in the fridge too, along with Anchor Porter and other treats if cocktails are just that little too far from your comfort zone.